The end of the road.

The photography was took in Caño, Cangas de Onís. The main idea was to capture the best jump of the salmon, trying to transmit the force with which it has to push itself because of the terrible current. Maybe I had obtained more photographs if I had gone to their encounter earlier since this year the firsts snows came before, what increased the river channel.

As if guided by a lighthouse, these Atlantic salmon arrive back after their long journey from the seas of the arctic circle to the same river where they were born. Making a stop, they accustom their bodies to a new degree of salinity and wait for the first rains of autumn to be able to overcome the river until the end of their journey.

It is strange how nature tests them. The great force of the current pushes them forward, but without wasting their energies, looking for support points in the eddies and turbulence. 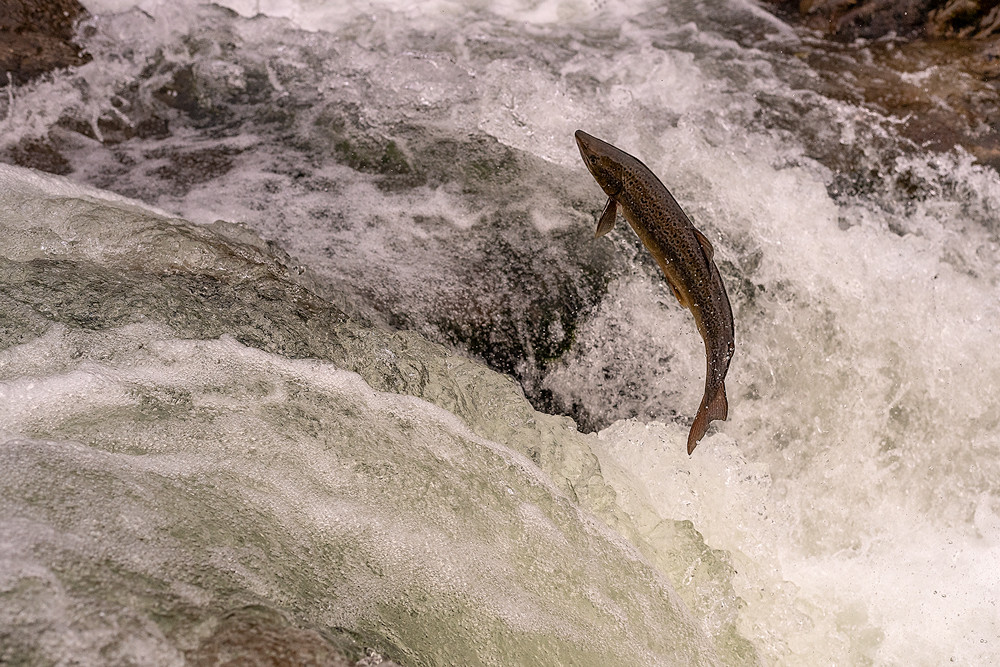 There are several ways to make the shots. Perhaps the biggest decision is to look for the right framing. There are several places to be located depending on the focal length that will be used. The simplest thing would be to place the camera on a tripod, and previously focused and framed, wait for the salmon with the trigger cable in hand and the camera in the largest possible burst mode.

Another method, which is one I've done this time is, with the camera in hand, as close as possible to one of the jumps; which entails some danger, because you have to slip by just a meter and a peak on a slippery stone, to reach a rather narrow and slippery ledge, from which a fall could be a bit tragic. Once placed, with the camera in hand and a focal length of 50 mm, I wait for some specimen to dare to jump that obstacle. Framing constantly and with your finger on the trigger button, you can only wait and be quick before the appearance of a salmon. It is not easy, because the speed at which they are thrown out of the water is terrible. Here, the ability of the photographer to press the shutter button as soon as possible is more decisive. Not all the specimens that jump are photographed successfully, but as if it were a fisherman, patience is a tool that should not be missing in the backpack of any nature photographer. 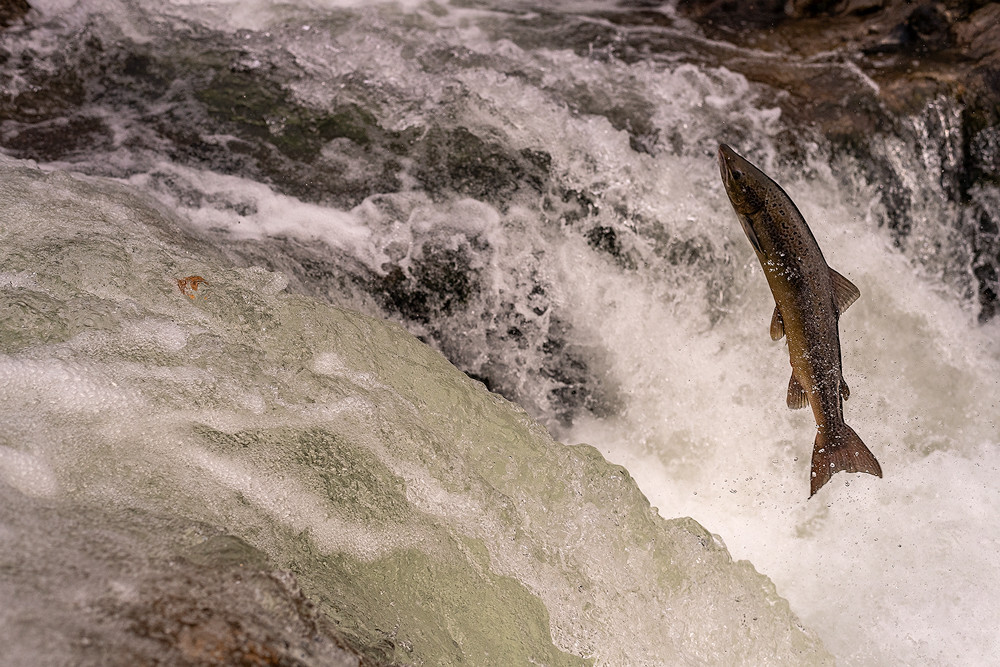 Another frame that I made, was already further from the jump. Equipped with my 500mm, instead of being a few meters or even less from the jump, I place myself at a good distance, just behind it, looking for a different framing and trying to show, with another point of view, the distance they have to go up river. 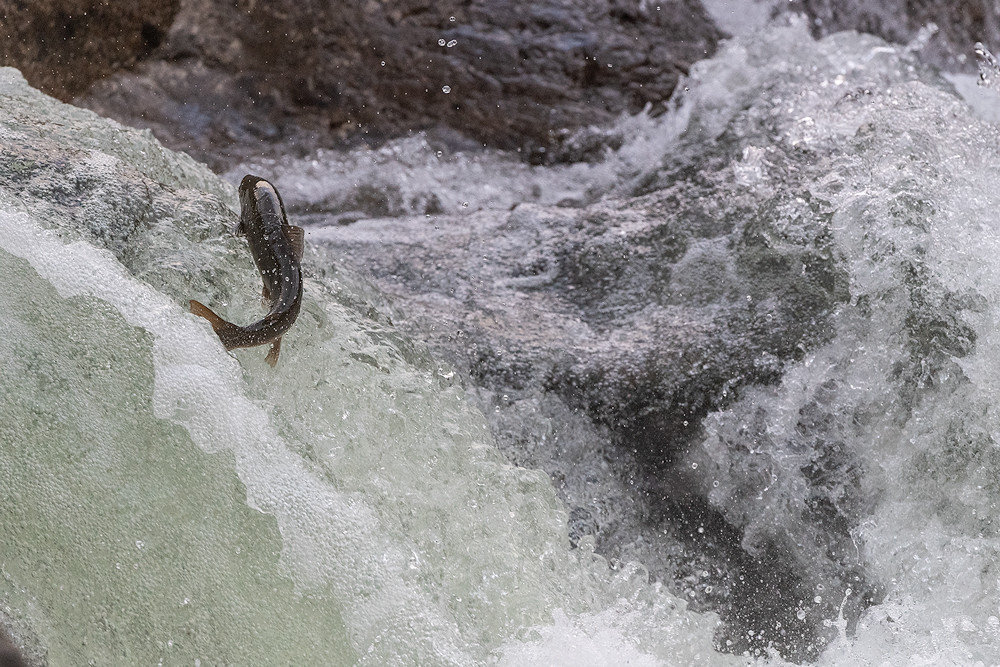 Regardless of the quality of the photographs we manage to take or not, it is very rewarding to separate the view of the camera a few minutes, and try to enjoy the visual beauty that the moment offers us, and not be obsessed with capturing as many images as possible. As, should the moment of capture be above the experience and enjoyment of nature in its purest form? 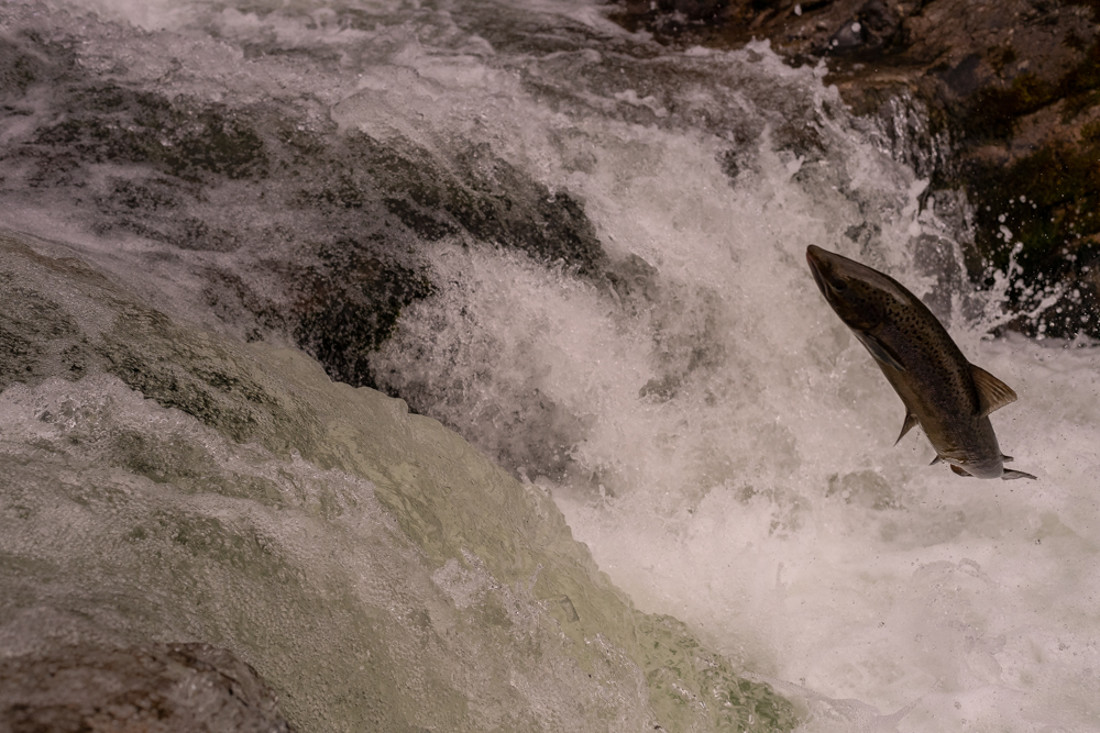